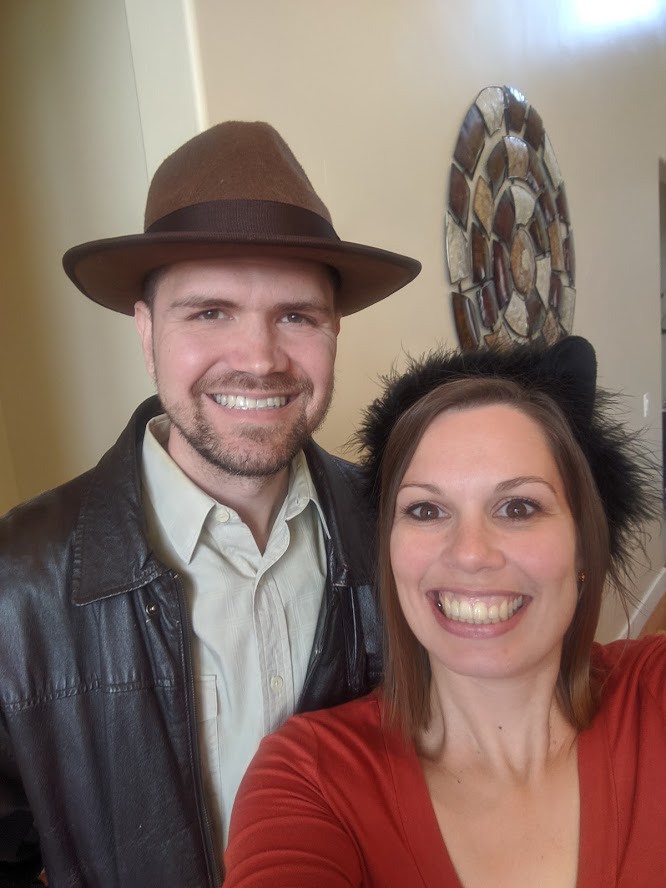 It's been a while!

Ross has been working VERY hard on the the single-player campaign for Summoners Fate, and taken a step back from social media to give it 100% his focus. It is looking amazing so far, and he's adding so many unique, fun, weird ('cuz we like weird!) and strategic elements for a killer experience.

I wanted to share that Summoners Fate was nominated for "Game of the Year" at the Utah Game Developers Choice Awards 2019! We will be attending tonight, and we're so excited to be nominated with so many other awesome games. I'll post pics of the event! Read more about it here.

First I must say that I fully back the comments made previously. And probably most of all the fact that the randomness of Peter's campaign added to the replayability. I also have ideas about how to tackle the difficulty of proposing relevant cards to the player, but I'll keep this for another post as this one is already long enough (brace yourselves!).

Indeed besides these technical aspects I've been thinking about the storytelling supporting the single player campaigns. I think it's also important in making it enjoyable to the player, and contributing to a compelling experience.

Quests
I see a campaign as a quest, and each quest as a collection of locations that you can explore. Each location has several rooms, connected together, in which the encounters and adventures take place.
I envision quests being organized by summoner, for instance Sylvia's initiation quest where she gets her squirrel hurling staff to achieve her objective. After all, this game's name is "Summoners' Fate", right? So how should that become apparent during single player campaign?
My proposal is that each quest starts with an encounter with a seer. The seer uses a divination method (see the following section for details),  revealing to the summoner that his/her fate is to fulfill a given mission objective.
In Sylvia's example it would be freeing the sacred forest from the orc intruders, and the seer would for instance read that fate in the shape of the shadows of a dying tree's branches. This campaign would therefore be known as "Sylvia's dying tree divination".
If we keep the notion of the campaign culminating in a big boss fight, then the divination will likely reveal that saving the forest requires killing the orc chief who launched the attack (text overlay on the divination picture, as the seer provides his interpretation). Of course the chief is not easily accessible, being remote and having lieutenants and factions guarding the area that they have already invaded, between Sylvia and his headquarters. However the ways leading to his headquarters are made plain by the seer's divination.
But divination is imperfect, and it only provides limited information: possible paths, approximate strength of the opposition, and resource spots. Paths are symbolized by lines (shadows of branches in our dying tree example). Strength of the opposition is symbolized by the size of the nodes (the larger the stronger the opposition). Resource spots are symbolized by movement (a fluttering leave at the corresponding node in the case of the dying tree).
Now this storytelling can blend with the campaign map concept, providing both an explanation and a beautiful background for each campaign. And the fact of combining summoner + divination to define a campaign provides limitless opportunities wiithin a common framework. Wikipedia alone (https://en.wikipedia.org/wiki/Methods_of_divination) can provide tons of divination ideas.

Divination methods
Here are suggestions of how to implement various divination methods in the above framework. The intent would be to build an engine capable of creating the rendering of the divination based on input parameters (number of nodes, levels, etc.), just as the campaign map was working.
- "Coffee ground": The shape of coffee ground traces on a percolating cloth (movement: drops of the remaining water passing through)
- "Green sticks": Sticks dropped on the floor (movement: leaves left on sticks, fluttering in the wind)
- "Beachcomber": Sticks and stones thrown back on the beach by the sea (movement: dried algae fluttering in the wind)
- "Spider web": A spider web in a tree, illuminated by the light of dawn, whose rays are filtered by branches and therefore only light up some of the strings (movement: bugs trying to escape)
- "Could": The shape of clouds (Movement: flickering light, or circling birds)
- "Fur": The shape of spots on an animal's fur on a stretcher (movement: roaming bugs)
- "Rune dices": Dices with engraved runes thrown onto dry dirt, making traces as they roll (movement: dried leaves captured underneath some of the dices, fluttering in the wind)
- "Mercury chiromancy": Lines on a hand's palm, some getting highlighted by mercury poured onto the palm, and mercury pooling forming nodes (movement: vibration of some of the pooling spots)
- "Bonfire": The shape of charcoal and ashes after a bonfire ceased to burn (movement: remaining ambers revived by the wind)
- "Petal": petals scattered and pooled by the wind (movement: fluttering)
- "Dying tree": Shadow of the almost bare branches of a tree (movement: few remaining leaves fluttering)
- "Rodent track": Traces of rabbit steps in the snow, between bushes, seen from a high point (Movement: moving branches)
- "Crystal": Veins and inclusions inside a slice of stone crystal, revealed by placing it before a candle (movement: flickering light)
- "Stream": Sticks and stones at the bottom of a shallow mountain stream (movement: flickering light at the surface of water, or water gushing around the few stones surfacing)
- Etc

Thanks for reading to the end. Comments are welcome!

Use the Gate of Fate card from Summoners Fate & let destiny decide. 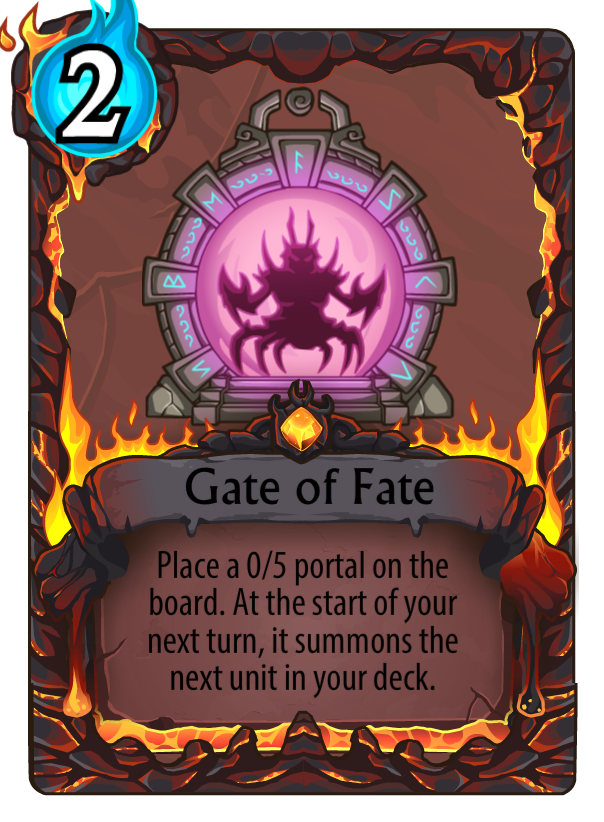 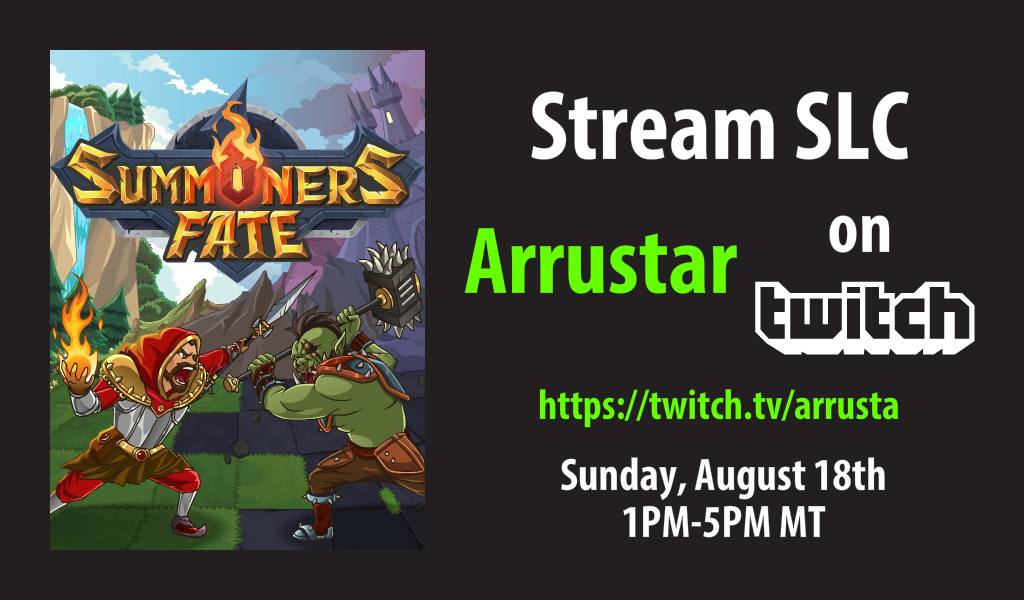 Happy Sunday everyone ! I am excited to announce that Arrustar, a welcome new player in our D20 community and a member of local StreamSLC community will be streaming Summoners Fate this afternoon from 1PM to 5PM MT.  You'll be able to watch the stream from his channel here starting in just an hour from now: https://twitch.tv/arrustar
25 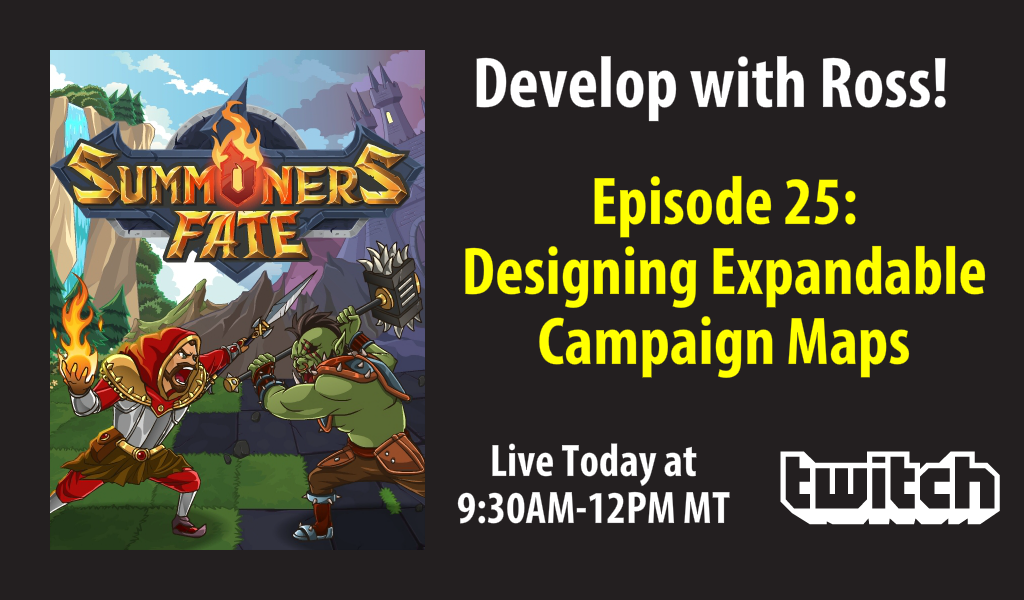 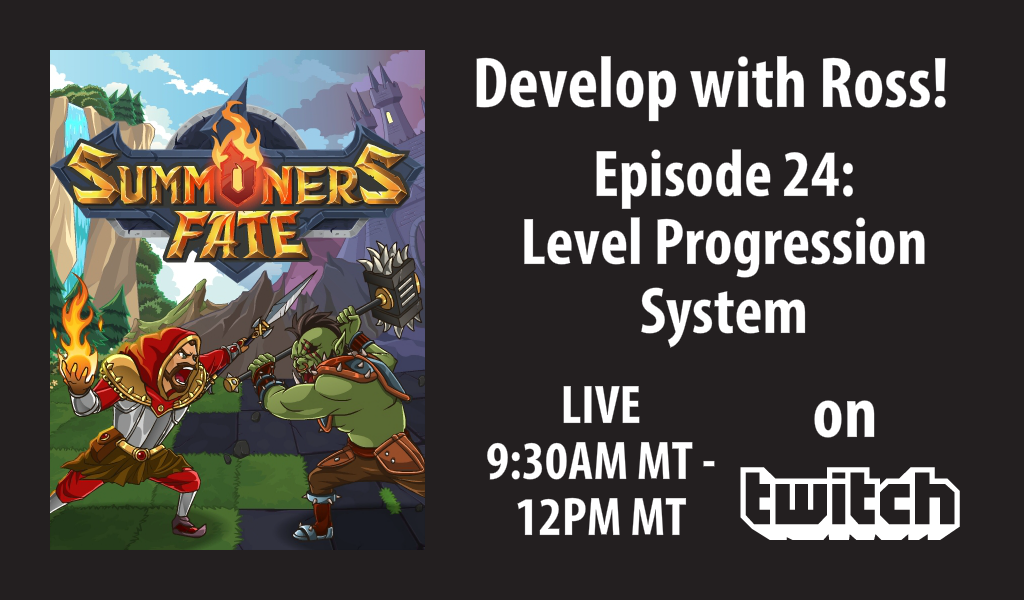 Develop with Ross Episode 24: Level Progression System
Level progression systems define the pacing through which a player grows to acquire new skills and the escalation of difficulty such that they face challenges well-matched to their ability and timing within the game experience. Creating a properly tuned level progression is one of the most important faculties of game design. Join us today to learn how we're tackling the development.

Develop with Ross Episode 23: Let's Make Gold
Today I'll be expanding on our design pillar of strategic resource management by adding gold and shop systems to our single player campaigns in Summoners Fate.